You are here: Home1 / ceiling decals 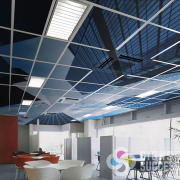 With a few test runs of printed ceiling tiles under our belt, we decided to take the next step and print a full image over the approximately 30 ceiling tiles in our break room.  After bringing down each ceiling tile one by one and running it through our HP FB500 printer, each tile was repositioned in its respective place, creating one big picture.  The image we decided on was a full cityscape with tall buildings rising into a blue sky.

Some of the tiles were used for color testing, and a few new ceiling tiles replaced the ones that were eventually discarded in testing.  Having worked with both new and existing tiles, Signs for Success production specialist Rich Wilke noted that using new tiles to print ceiling graphics was a much better option.  “The old tiles had dust settled into them, and after running them through the printer, I had to spend a few extra hours cleaning out the machine.  Working with new tiles was much easier.”

What makes a good ceiling graphic?

Before searching for a good image for ceiling graphics, you should first map out the area to be filled.  If, for example, you are working with a long narrow space, you’ll need to find an image that fits that space.  A panoramic image might be just the thing.  Similarly, “you wouldn’t print the Sistine Chapel in a square room because the Sistine Chapel is a big rectangle,” Signs for Success designer Will Oakley explained.  Also, take note of irregular curves or corners and how that will cut into an image.

You may also want to think about perspective.  When we set out to find an image for our break room ceiling, we knew we wanted an image that gave a 3D effect.  The cityscape was perfect with tall buildings and sky scrapers all around; it gives you the feeling of standing in the middle of a city.  Finally, be sure your image is high-resolution, or can be purchased in a high-resolution format.  This is extremely important in getting a clear image over a large space such as a ceiling.

So far, we’ve focused on printing ceiling tiles.  If you don’t have ceiling tiles, or want a less permanent option, ceiling decals are perfect.  Ceiling decals work on any surface, from smooth to highly textured.  They can be custom sized large or small and even shape cut.  Our PT Changeable material allows the decal to be adhered firmly to most smooth surfaces, then pulled off and re-applied elsewhere without any loss of adhesion.  If you don’t plan on changing the placement of the decal often, we have several other vinyl decal options that will work on flat or even textured ceiling surfaces.  Even wallpaper can be custom printed and applied to the ceiling to give a unique textured look, like at this rest stop in Cusick (left).

Ceiling graphics are great for a dentist’s or chiropractic’s office – anywhere people spend a lot of time on their backs.  Pictures and even text on the ceiling keeps people entertained, can be used as a conversation starter, or just add character to an otherwise bland space.  The ceiling may also be useful advertising space.  Ceilings are underused spaces that demand attention.  Print specials on individual tiles or decals and change them out periodically; the ceiling will become a place people always look.  Contact Signs for Success for a free quote on custom ceiling graphics.